Taking my courage into my hands once more, I include these politically incorrect thoughts at great risk of feeding some people's ongoing vendetta against Irish Catholics. As some say, "Freedom's just another word for nothing left to lose. Nothing ain't worth nothing, but it's free." 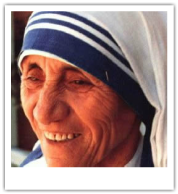 Mother Teresa
An Inspiration for Living!

If you are kind, people may

accuse you of selfish, ulterior motives;

If you are successful,

you will win some false friends,

and some true enemies;

What you spend years building,

someone could destroy overnight.

If you find serenity and happiness,

others may be jealous;

The good you do today,

Give the world the best you have,

and it may never be enough;

Give the world your best anyway.

In the final analysis, it is between

you and God. It was never

between you and them anyway.